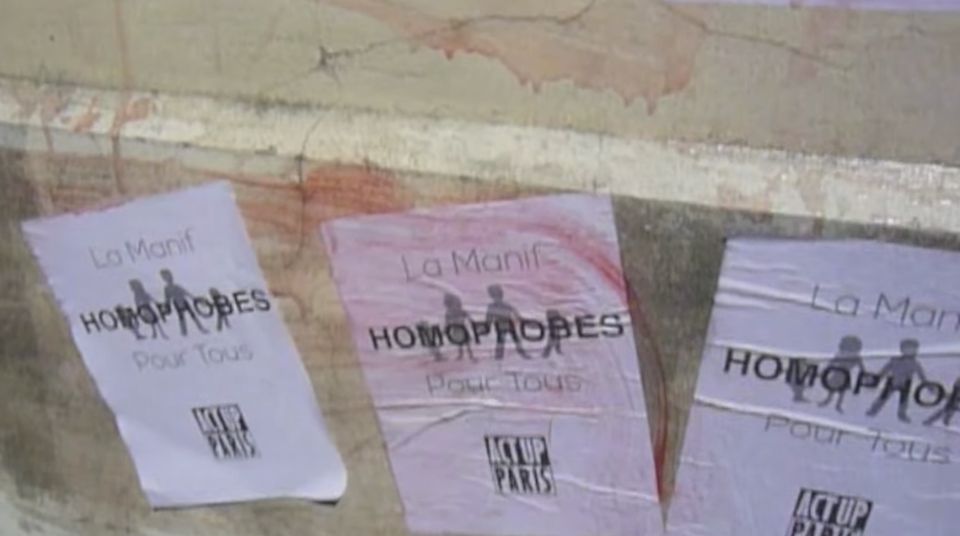 Posters stuck up in August 2013 by Act Up Paris activists, with the term “homophobes” over the logo of Manif pour tous.

The ex-president of Act Up Paris was convicted on appeal for slander against [the French anti-Marriage Equality group] Manif pour tous. The cause: posters carrying the logo of the association stamped with the word “homophobes”. The decision could create a precedent.

“Branding Manif pour tous as homophobes is a criminal offence.” That’s what Mr. Henri de Beauregard, lawyer for the association opposed to marriage equality, maintains after the conviction on appeal of Laure Pora on Wednesday. The ex-president of Act Up Paris, an association fighting against AIDS, was convicted of slander (injures publiques) and fined €800, to which was added, according to AFP, the payment of €800 damages and €1500 costs.

On 4 August 2013, Act Up Paris activists defaced the façade of the Jérôme-Lejeune Foundation, which is known for its support of the fight against abortion. Ludovine de la Rochère, president of Manif pour tous (LMPT), was at the time an employee. As shown in the video below, some posters showing the logo of LMPT stamped with the comment “homophobes” were pasted on the walls during that action.

Remember, according to the law of 29 July 1881 on freedom of the press, “any insulting expression, contemptuous term or invective which does not contain the accusation of any [particular] fact/act is a slander”. Not to be confused with defamation, consisting of “any allegation or accusation of a fact/act which harms the honour or the esteem of the person or body about which the fact/act is alleged”. No specific act having been mentioned in the posters, LMPT didn’t press charges against Laure Pora for defamation. An error that they made when attacking Socialist Party Senator Jean-Pierre Michel for defamation in March 2013. He had, in a public e-mail, branded the movement “the worst homophobes”. In a judgement delivered on 18 February 2014, the Court of Appeal confirmed that there was no case to convict the representative for defamation.

“Putin to the rescue!”

Contacted by Libération, Ms. Karine Geronimi, lawyer for Laure Pora, deplored the conviction and questioned the idea of slander. In her opinion, we shouldn’t forget the origin of the action taken by Act Up, also clarified in the introduction to the video previously cited. In May 2013, LMPT activists assembled in front of the Russian Embassy to “ask for Putin’s help”, in particular because “Russia still defends the family and marriage”.

Yet “Russia carries on a clearly homophobic policy with grave consequences, some Russian homosexuals suffering from AIDS prefer to not seek care for fear of being stigmatised or assaulted” recalls Ms. Geronimi. “Act Up considered that appealing to that country was a homophobic act”, she continued. LMPT eventually distanced itself from the assembly in front of the Russian Embassy, Ludovine de la Rochère talking about the acts of isolated activists and going so far as to assure that: “We will not stop defending fundamental liberties, so that’s certainly not so that we can go asking for help from Moscow.”

Ms. Geronimi, who at the moment has not seen the judgement of the Court of Appeal, referred to that context in pleading the case of her client who, according to her, “expressed an opinion, which was becoming difficult in France”. [update 4/1/2016] Laure Pora is appealing the decision on Thursday. In a communiqué, Act Up Paris supported their former president: “we cannot accept that the Court of Appeal [would] thus deny us the means of naming and denouncing the political discourse of our adversaries”. The association also reiterated its equal anxiety over another affair: a charge of defamation from Ludovine de la Rochère with the Jérôme Lejeune Foundation joining as a partie civile [seeking civil damages], which will have its first hearing on 17 November.

Léa Forstier, a lawyer specialising in press rights, participated in writing a kit targeting the media “dealing with LGBT themes with respect for individuals”. In her view, “the simple fact of opposing the marriage of people of the same sex could infer a certain homophobia”. And if one imagined the case of a movement against biracial marriage: “If demonstrations against the union of people of different colours or origins took place, wouldn’t it seem legitimate to deduce that it contained a certain amount of racism? As soon as one refuses the same rights to individuals because of their sexual orientation, the question of homophobia cannot be concealed.”

She continues: “In the debate, the word ‘homophobes’ should not be analysed as an insult directed towards a group, but as a legitimate questioning of the ideology which is implied by such a mobilisation.”

For Ms Caroline Mecary, lawyer and Ecology Europe—The Greens councillor for the City of Paris, committed to the defence of equal rights, the conviction of Laure Pora could, if it becomes a precedent, “encourage a flood of homophobic remarks and offensive analogies with regard to same-sex couples”. According to her, LMPT is a political movement and must be able therefore to be criticised as such. She recalls that in the same way the courts did not convict Jean-Luc Mélenchon for calling Marine Le Pen a “fascist”, considering the term was not an insult “between political adversaries on a political topic”.

Considering the description “homophobes” as an insult constitutes, according to Ms. Mecary, “a real confiscation of a term that one no longer has the right to use”, and the possible beginning of proceedings against the emblematic figures of the struggle for equal rights. This is the subject of a blog post by activist Gwen Fauchois, ex-vice president of Act Up Paris in the 90s. Reacting to the conviction of Laure Pora, Fauchois writes: “Imposing its own terms is nothing trifling: it’s dictating what is acceptable and what isn’t. What can be thought. And under what conditions. Manif pour tous has abducted the ‘pour tous’ [marriage equality is called mariage pour tous “marriage for all” in French; manif pour tous means “demo for all”], demonised ‘gender’, appropriated the ‘family’, speaks to us of ‘fatherless IVF’ from now on, and busies itself with siphoning off ‘homophobia’”.

Seeking to display a “peaceable” image, LMPT has not stopped denying any homophobic tendancy in its communiqués and other presentations by its official representatives. In its parades, the spoken word is however less restricted, in fact totally crazy. Hence the choice of weightier words in announcing the conviction of Laure Pora on Wednesday: “The defence of the rights of the child and its parentage is not homophobic”, the movement proclaimed on Twitter.

In the LMPT’s communiqué, its chief organiser, Albéric Dumont, even maintained that “democracy comes out of this affair the winner”. At the same time, Christine Boutin was convicted on appeal for inciting hatred because of sexual orientation. She had described homosexuality as “an abomination” during an interview.

We have 67 guests and no members online