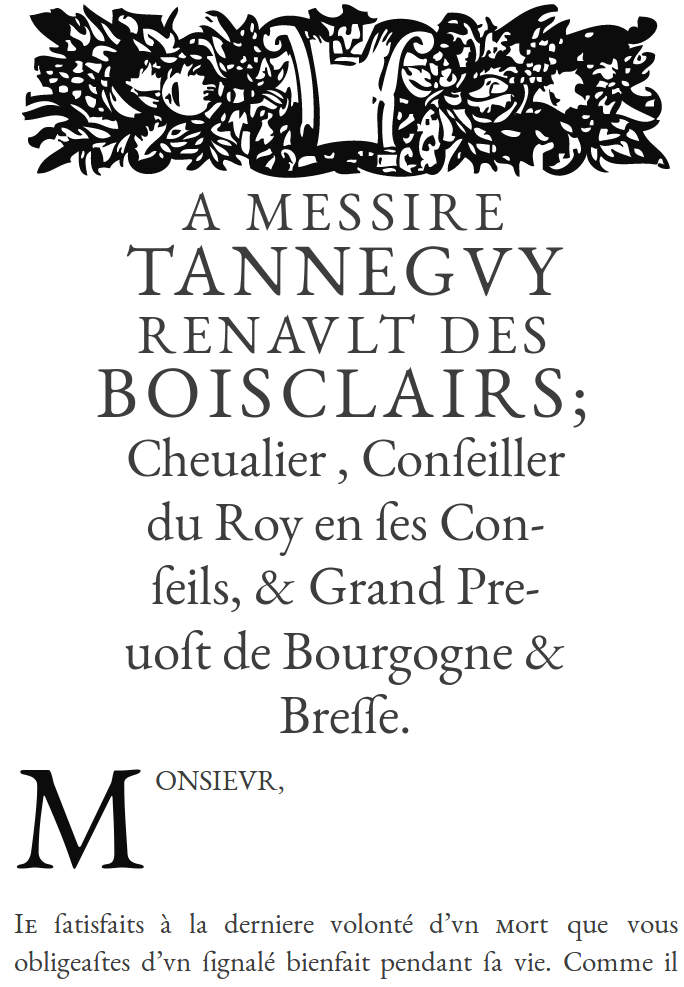 I fulfill the laſt wiſh of a dying man whom you obliged with noteworthy benifience during his life. Since he was known to an infinitude of people of intelligence, by the fine fire of his own, it was abſolutely vnbearable, that many perſons knew not the diſgrace that a dangerous injury followed by a violent feuer, cauſed him ſome months before his death. Many knew not by what good Spirit he had been ſaued, but he belieued that the name ſhould not be leſs public, than the aduantage he deriued therefrom. You were his Friend, you often auowed it, & you euen gaue euidence of it on many occaſions, when you deuined his needs ; but what was this act, that other Men did not act as you did ? how did this appear to our Friend, compared to your appearance to a hundred others who were not of his ſtamp ? He muſt have ſtood out from the crowd, & that your generoſity diſtinguiſhed him from the great number that you have obliged, ſhowed not only, as Ariſtotle ſaid, Gene­roſum eſt quod à natura non de­generat
Ariſt. Hiſt. anim. op. primo. that it had not degenerated, but had enriched of itſelf in ſupport of ſo worthy a ſubject. So that when you had the goodneſs to giue him proofs of your protection & your friendſhip in his illneſs, whoſe courſe you arreſted by your care & the generous aſsiſtances you gave him in the extremity of his moſt violent euils ; it was ſuch a powerful protection for him , that he once more hoped from you that which a little before his death he begged me to aſk of you for this work; & that will alſo be of that great truſt , & of that laſt wiſh that you will recognize as thoſe which he ought to have had from your friendſhip ; ſince it is in that fatal moment that the mouth ſpeaks like the heart.

And I haue made myſelf the Interpeter of his own that much more willingly, ſince I took equal part in his diſgrace, as in the good that was known to him ; & for that reaſon, as by my own inclination , I am truly,

We have 38 guests and no members online