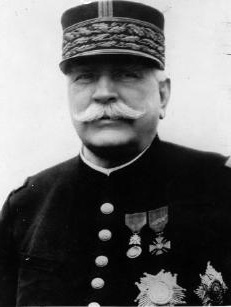 This word came up today in the context Donald Trump’s removal of James Comey as Director of the FBI. At first my brain leapt uselessly in the direction of ligoter “to tie up” (think ligature and you’ll see where this is coming from), but actually this verb, which today means “dismiss, fire, sack”, has a much more obscure origin.

The usual version, though lacking much actual evidence, goes like this. Early in the First World War, General Joseph (Jacques Césaire) Joffre, newly appointed commander-in-chief of the army (and proponent of General Foch’s concept of offensive à outrance “attack to excess” which lead to so many deaths), was cleaning house. After the First Battle of the Marne (7–12 September 1914) had stabilised the front (as well as anointing “Papa Joffre” as a hero and leading to a rash of babies called Joffre and Joffrette), it became clear that both sides’ dreams of a quick war would not come true. Consequently Joffre began removing 134 subordinates he considered incompetent and reassigning them to the 12th military district at Limoges where they would be out of the way, hence the verb limoger meaning “send to Limoges”.

In fact, there is no evidence of Joffre ever using this expression and less than a dozen officers were ever actually sent to Limoges, while a few others stayed in towns within the 12th military district. This also happened before the Marne. Many of the orders also did not originate with Joffre, but with the Minister of War, Adolphe Messimy, who was happy to  claim in his memoirs that he invented the term himself.

Guillaumat, following my orders, commanded them to leave Paris and go to…Limoges. “Why Limoges?” I’ve often been asked. I desired that these generals, declared useless at the front, should be distanced from Paris, where they would have done nothing but spread gossip. Where to send them? Lyon, Marseille, Bordeaux were too large to avoid quickly becoming home to politico-military intrigues. I briefly hesitated between Nantes, Rennes and Limoges. I had to choose: Limoges was the choice.

The word did not exist yet, so it was I who enriched the French language.

However, Messimy was replaced as Minister on the 26th August 1914; the order sending officers to Limoges came the next day. Guillaumat himself, though writing much closer to the events (19th July 1915), exaggerates the numbers.

The expression “go to Limoges” [« aller à Limoges »] has become standard for the cast-off generals. Messimy suspended them, his successor detained them at Limoges where there were about sixty. Today, we let them go where they will, but the expression has remained. That said, they’re replaced quite a lot; so why suspend them?

So, it seems the myth has far outstripped the truth here, but that messy, arbitrary, whimsical aspect is what makes languages so interesting. You do wonder, though, what the good citizens of Limoges think about all this.

We have 48 guests and no members online