St. Peter was a Communist!

A translation (for the Irish-impaired) of an article on tuairisc.ie—más maith leat an leagan Gaeilge a léamh tá sé anseo.

St. Peter was a Communist!

As much as the Church has tried to keep it hidden, it’s clear that St. Peter was a communist. You could say Pope Francis wasn’t too far from that same communism, perhaps. 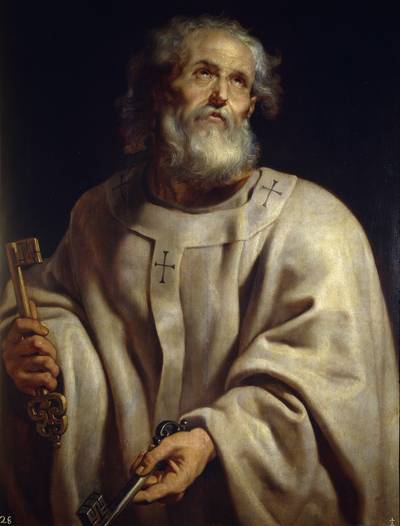 As all the greatest journalists will tell you, it’s come to light now that the first Christians were Communists with St. Peter at their head. I’ll prove it to you shortly.

This has been known in the Church for a long time, but it’s not something that any Pope has drawn attention to in two thousand years. Pope Francis has been going close to it lately and it wouldn’t surprise me if he issued a pastoral letter soon explaining it to the faithful.

There are few days now that he doesn’t make an attack on the finance system while speaking on behalf of the poor. He did it recently in the European Parliament. Indeed, many people on the left are suggesting that he is a Communist himself.

I gave a “sermon” on this topic in Cill Chiaráin a while ago.

It was the parish priest, Father Pádraig Standún, who asked me to give it. I explained to him that I was an atheist and a Communist. That didn’t put him out at all. “We must discuss these things,” he said.

The sermon appears in this month’s edition of the magazine Comhar.

But back to the first Christians. If you have any doubts, go to the Irish edition of the Bible from Maynooth. Visit the Acts of the Apostles and you’ll find there the story of Ananias and Sapphira. It’s under the heading COMMON PROPERTY. What’s that but another word for Communism?

There was also a man called Ananias. He and his wife, Sapphira, agreed to sell a property; but with his wife's connivance he kept back part of the price and brought the rest and presented it to the apostles.

Peter said, 'Ananias, how can Satan have so possessed you that you should lie to the Holy Spirit and keep back part of the price of the land?

While you still owned the land, wasn't it yours to keep, and after you had sold it wasn't the money yours to do with as you liked? What put this scheme into your mind? You have been lying not to men, but to God.'

When he heard this Ananias fell down dead. And a great fear came upon everyone present.

The younger men got up, wrapped up the body, carried it out and buried it.

About three hours later his wife came in, not knowing what had taken place.

Peter challenged her, 'Tell me, was this the price you sold the land for?' 'Yes,' she said, 'that was the price.'

Peter then said, 'Why did you and your husband agree to put the Spirit of the Lord to the test? Listen! At the door are the footsteps of those who have buried your husband; they will carry you out, too.'

Instantly she dropped dead at his feet. When the young men came in they found she was dead, and they carried her out and buried her by the side of her husband.

And a great fear came upon the whole church and on all who heard it.

There are two other things to say about that: if the Sunday Independent was there at the time, you can be sure they’d say that St. Peter had set a “kangaroo court” on the pair.

After all, the Roman Empire wouldn’t accept that court.

The judgment would remind you of Joe Stalin. He sentenced people to death who opposed the Communist system in Russia.

But St. Peter had it much easier; God was always there to do the deed for him.

“I never heard either that St. Peter gained a bad reputation like Joe Stalin,” a Communist friend said to me when I told him the story.

If God is on your side, you can do anything.

We have 40 guests and no members online