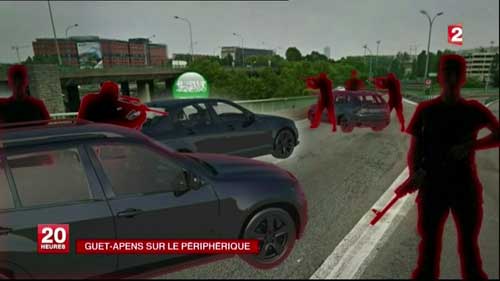 Today’s odd expression from the French News is guet-apens.

We can try to dissect and analyse this, but since apens is only used in this one expression we won’t get too far with that bit.

So what about guet? From my news-skewed vocabulary the related word that springs to mind is guetteur “lookout”, usually used in relation to suburban drug dealing. The guetteur is the guy in the street who you approach with your money.  He then goes off somewhere and comes back with your deal. That way the real dealers don’t do the risky part and the guetteur only ever has a limited amount of cash or drugs on him.

It’s tempting for an English speaker to see some kind of pun here (get-eur) since he gets you your drugs, but it’s just one of those co-incidences.

The verb it comes from, guetter, means to watch (intently) or to be on the lookout for something, which gets us near the meaning but not quite there.

In fact a guet-apens is an ambush and looks like legalese.

And the news story...

Last night in Paris, shortly after 9 pm a convoy of 11 vehicles, one of them containing a Saudi prince, left the hotel George V near the Champs Élysées heading for Bourget airport. They were ambushed at the entrance to the Ring Road by between 5 and 8 masked and heavily armed men in high-powered cars. They got away with €250,000 and some private documents in a professional commando operation in which no shots were fired. The Saudi embassy stated there were no sensitive documents involved, but declined to identify the prince involved in the attack.

We have 165 guests and no members online