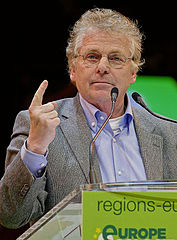 Daniel Cohn-Bendit a.k.a. Dany le Rouge (Danny the Red), whatever you think of his political positions, has always followed an interesting and individual path. First coming to prominence as one of the faces of the May ’68 student movement in France, despite not actually having much influence on the movement as it developed, he was expelled from France by the end of that month as a “seditious alien”. This was possible because, although he was born in France to parents fleeing Nazi Germany he was a stateless person until he chose German citizenship at 14 years of age simply to avoid conscription.  He continued to be involved in left-wing activism in Germany, becoming a friend of Joschka Fischer, who later became German Foreign Minister and Vice-Chancellor.  In 1984, he joined the Green Party, moving away from more radical anarchist politics.  In 1994 he was elected to the European parliament and in 1999 became the leader of the French Green Party.

His position has become more centrist over time and he has often annoyed party members by openly disagreeing and being happy to negotiate and associate with conservatives.  He attracts criticism from the left for his support for European federalism and military actions such as Bosnia and Afghanistan, and from the right for his approach to immigration, drugs and nuclear power.  Now, aged 69, he is retiring from the parliament.  Here’s some of his final speech.

I am for the United States of Europe. Yes! I believe that a federal Europe is the future. If we retreat to the nations we are beaten, we will be swept away like national sovereignty was swept away by globalization…

Yes, it’s hard, but it’s a future that will be better for our children. Don’t be afraid! Don’t be afraid to confront the nonsense of the far-right and the far-left when they talk about Europe.

We have 51 guests and one member online