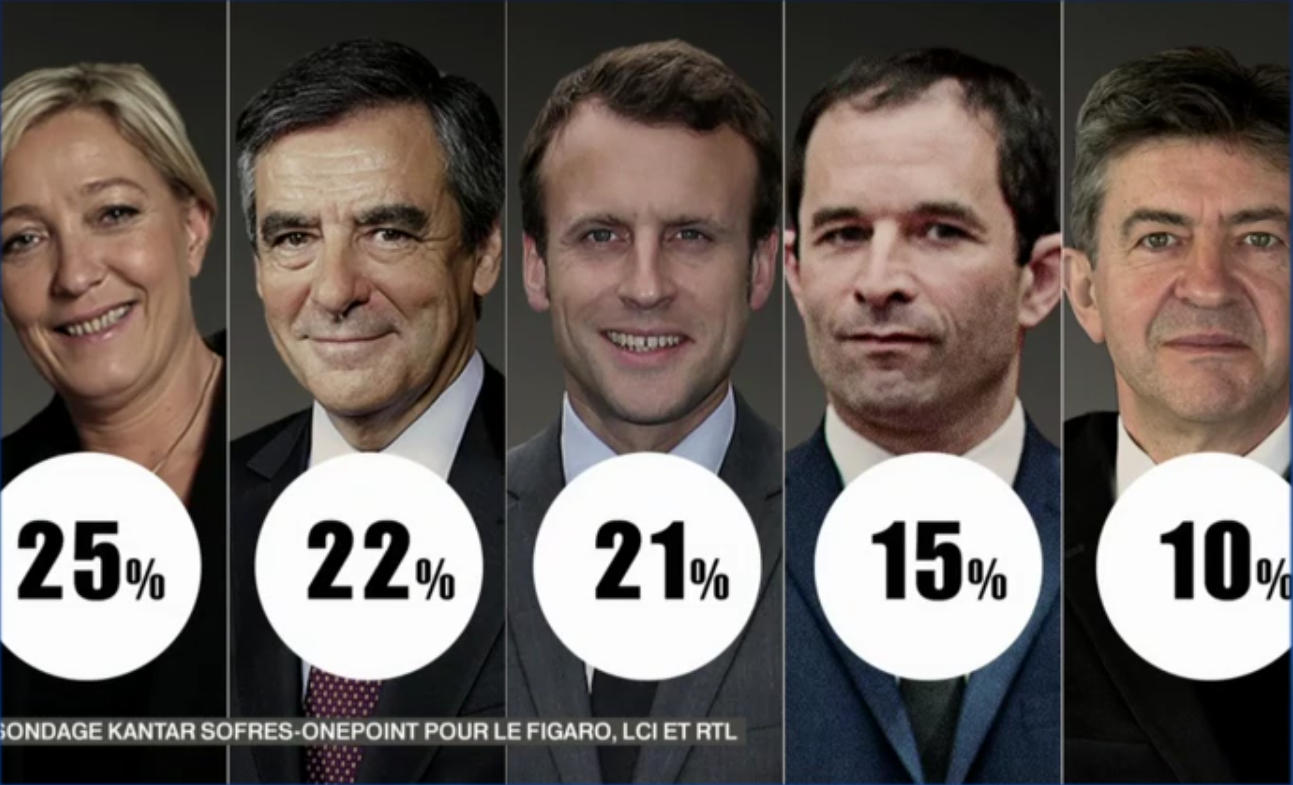 It’s early days yet (the first round of voting is 23 April) but it’s disturbing to see the National Front coming first. It’s extremely unlikely that they would win the second round as the other parties’ votes would tend to go against them, but you never know. The left is quite fractured, due to the general drift to the right which seems to be mirroring (somewhat) the malaise of the left in Anglo-Saxon countries from the 1980s on, culminating in the bland Blairism that MPs in the UK seem to see as the only way these days.

There was a certain amount of surprise when the Socialist Party chose Benoît Hamon as their candidate (with 58% of the vote). The ‘pragmatist’ Prime Minister Manuel Valls seemed to be the obvious choice to counter the turncoat Emmanuel Macron, a young merchant banker who served as Minister of Economy, Industry and Digital Affairs in Valls’ second ministry, before forming his own centrist political movement En Marche!  (“Forward!”), co-incidentally having his initials. In fact, many of Valls’ and Hamon’s stated policies are direct contradictions of each other. For example, Hamon is the only candidate calling for France to do more in accepting refugees—everyone else seems cowed by the threat of the National Front. He also doesn’t seem to think banning the burkini is essential to the proper functioning of the secular state, unlike pretty much everyone else. Sadly, since his victory various Valls supporters have started saying they won’t support him and even before the primary some Socialist Party figures were beginning to support Macron. Solidarité is a little thin on the ground.

Incidentally, was this graphic produced by a Valls supporter? Is that the best picture they could get of Hamon? He is quite laid-back and only seems to wear the cheapest suits, but still…

Another cat that may be about to drop among the pigeons is the slight possibility of François Fillon dropping out of the race. He is in the middle of a scandal about his (English) wife being employed as his political aide. The Republicans are taking the tried and true route of arguing it’s all within the rules (which it is) and everyone’s doing it (91 parliamentarians at least employ a family member), but it’s all a bit on the nose, especially as the amount paid out is much more than the average political aide could expect to receive and the work (if there was real work involved which is hard to prove or disprove) seems to have been all done from their country home. She doesn’t even seem to have a pass/i.d. for the Assembly. Certain delegates are getting nervous about it after being questioned by their constituents and party activists over the past few days and there have been quiet discussions about who might be their plan B. Alain Juppé is the obvious choice, but at 71 he might stand out a bit too much from the field (Le Pen is 48, Macron 39, Hamon 49, Mélenchon 65). There is a suggestion they might turn to the Sarkozy-favoured François Baroin (51), who I personally find nauseatingly unctuous, but this is highly speculative as he didn’t stand in the primary at all. But if the field was opened up again, I expect you would get quite a few of the younger contenders having a go. Xavier Bertrand certainly. Laurent Wauquiez probably…ugh.

If the Right was to end up as fractured as the Left, it’s hard to say who would benefit more. Macron, whose policies are pretty ethereal apart from a vague sense of populist middle-wayism; or Le Pen, whose appallingly stupid policies are pretty well known.

We have 185 guests and no members online