What does the cock say? 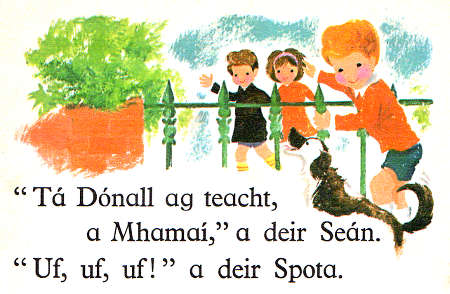 Modern Irish is not a language that is overly blessed with words for the sounds animals make. Some of them have just been borrowed from English, or at least coined in imitation, e.g. dogs might say bhuf (woof) or uf (oof) depending on who you ask. On the other hand it has a few special words for calling to animals such as tiuc! tiuc! (hens), suc! suc! (calves), huít! huít! (ducks) or toch! toch! (pigs). So I found this story about what a rooster says (when it’s not saying cac-a-dúdal-dú) quite interesting.

When the Saviour had been crucified and buried, a guard was placed on his tomb and teams of soldiers were taking turns at it. On the second night, after a new team had arrived at the tomb, the soldiers who were being relieved went into a house at the bottom of the hill. An old man inside it had a rooster cooking.

The old man asked the soldiers, “Any chance He will rise?”

From that time, the rooster was highly esteeemed and his call—‘Mac na hÓighe Slán’—would drive away evil spirits and malicious fairies.

There are probably quite a few versions of this story and at least one more rhythmic interpretation: “Mac na Maighdine Muire slán” [makna maydinna mwirra slawn] (The Son of the Virgin Mary Lives).

*Slán, of course, actually means “sound, healthy” or “safe”, but “lives” is a better translation.

We have 46 guests and no members online