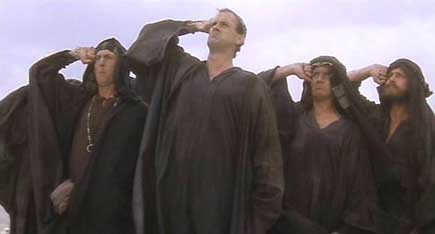 As amply parodied by Monty Python, it’s often hard to keep up with the splintering and renaming of organisations in the Middle East, but it’s also been interesting of late to try and keep up with the naming in our own media. The struggle for control of meaning never ends. So what’re we supposed to call these guys now? ISIS? IS? ISIL?

This is what they officially call themselves now. Straightforward and to-the-point branding that highlights their view that they’re the go-to guys for Islam. And that’s probably exactly why politicians in the west are starting to avoid using the term—it all sounds a bit too legitimising.

This was their name prior to 29 June 2014. An accurate geographical definition perhaps, but it ultimately didn’t suit their goal of a worldwide caliphate. This name gives rise to the two acronyms you hear most often in the English language media—ISIS and ISIL.

Why two acronyms? Because the Arabic name الشام‎ ash-Shām is a little ambiguous. In everyday speech it can refer to Damascus (دمشق‎‎ Dimashq) or to Syria (سورية / سوريا‎ Sūriyā / Sūrīyah) or to the historical region of Greater Syria which we might call the Levant.

So it becomes a point of contention which translation you choose: ISIL implies a larger area and a larger threat; ISIS implies a more closely defined (but still innaccurate) area and co-incides with the name of a pagan goddess. ISIS seemed to hold sway for a long time, but Barak Obama seems to have settled firmly on ISIL and Australian politicians seem to be following suit. It’s hard to see which of these is ‘better’ or why, but obviously someone somewhere has decided there’s something about ISIL. Personally I found the name ISIS hard to take seriously because it always made me think of Sterling Archer.

Another odd coincidence that occurred to me recently is that Isil is the name for the Moon in J. R. R. Tolkien’s contructed Elvish language Quenya (Ithil in Sindarin).

And then there’s the question of pronunciation. I’ve mostly heard /ˈaɪsəl/ (igh-suhl), but today I heard an American journalist on the radio call it /ˈɪsəl/ (iss-suhl).

But wait, there is apparently yet another choice.

Although they had previously been calling it L’État islamique, in the last couple of weeks the French government has started using the term Daech. This is simply the Arabic version of the ISIL acronym (the letters Dāl, ʾAlif, ʿAyn and Šīn), but it’s largely been used by competing rebel groups and ISIL/Da‘esh themselves consider it so derogatory that its use will win you 70 lashes.

Unfortunately every time I hear it I just think of this.

We have 120 guests and no members online